In our first “Woman in Mobile Spotlight,” we featured a computer scientist who created multilingual mobile-based STEM learning tools. In this edition we are proud to feature a woman whose skills in mobile policy were first honed while working for former U.S. Secretary of State, Hillary Clinton. Angela Baker, Senior Manager for Qualcomm® Wireless Reach™, shares with us how she leveraged her education in international relations to help shape an exciting career in tech, which includes providing government guidance for mobile health and mobile learning initiatives worldwide. We think she’s amazing because how many people can say they have contributed to improving maternal health in Morocco with mobile ultrasounds?!

How did you get into the mobile industry?

My background is primarily in politics. I worked on political campaigns and in government for 10 years. In 2008, I worked for Secretary Clinton on her presidential campaign.  An opportunity opened up about two years later to work for Secretary Clinton at the U.S. State Department in her Innovation and Technology Office – an office she created when she came in as Secretary. It, was a small office, but she was making a big push for the use of technology in diplomacy. I came on board to do planning and project management, and that was when I became really interested in technology. That was in 2011 and during my time there, we did a lot of cool things, like work on internet freedom and building the capacity of NGOs through the use of technology in a program called TechCamp. […]. I co-led a technology delegation to Brazil, which included a woman from Qualcomm with whom I really hit it off. When I decided to leave the State Department in 2012, I reconnected with my Qualcomm contact, who happened to be hiring for a senior position on the Wireless Reach team, which was very serendipitous.

Coming from a non-traditional mobile industry background, how does what you studied apply to what you’re doing now with Qualcomm?

Wireless Reach is a strategic corporate social responsibility program (CSR).  It’s unique to other CSR programs, as we’re housed in the Government Affairs division. A lot of our programs are done in conjunction with foreign governments because we’re funding projects around the globe in the areas of education, health, entrepreneurship, public safety and the environment. For the most part, those are issues in which governments are interested. My Bachelor’s degree is in International Relations and my Master’s degree is in International Conflict Analysis and Resolution.

For my Master’s, I studied about the effect of conflict on women, and now I oversee the mWomen vertical at Qualcomm, which focuses on women and mobile.  My background and experience are helpful, because when working with different governments, we believe mobile can have a positive impact on the economic and educational issues they are facing. I think there’s a big tie-in to the traditional path of study I took to the work I am doing now.

Do you have a favorite project that you’re working on at Qualcomm?

We have a really great program in Morocco where we trained ultrasound technicians to take ultrasounds, and transmit the images over the 3G network. This enables doctors or ultrasound technicians in rural areas to get second opinions on images in a faster, more cost efficient way. It started as an effort to help prevent placenta previa which is a fairly common condition in pregnancy, but because it often goes untreated, it results in maternal health problems. 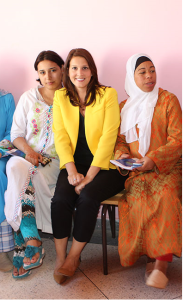 The only way to detect those issues are with an ultrasound. We ran the first trial in a few rural areas of Morocco. There were a number of successes that came from it, the main one being that the amount of time to share ultrasound images and to get a diagnosis significantly decreased. Because of the success, the Government of Morocco has agreed to scale the project to ten health clinics around Rabat and eventually nationally over the next few years.

What is your favorite mobile learning app, one that you use yourself?

I use a lot of social media to get access to information. I don’t push a lot out on Twitter but it’s where I go for news and information and I follow a lot of mobile leaders. Snapchat is sort of growing in that area and people are sharing information on that platform.

What advice do you have for other women who might be interested in pursuing a career in mobile technology?

We’re trying to do a lot of work at Qualcomm to help build the pipeline of girls and women who study STEM. We’re trying to focus early on because research has shown that girls start to lose interest around middle school.]. For girls and women interested in mobile tech, I would say that there are a lot of real world applications. We have this preconceived idea of an engineer or a coder, sitting in a room, crunching numbers all day or reading lines of code. I love my job because we’re really looking at how we can leverage the benefits of mobile for social good. If you are a girl or a woman and you want to change the world, or you want to help women and girls, the mobile device is going to be the way to do that. What better time to study mobile technology than now?