This is a co-researched post with international girl advocate phenom Sarah Johns who works for Plan International. With this post we recognise that today is International Women’s Day and that much remains to be done to ensure that women and girls throughout the world feel – and are – safe in their communities.

Rehana, 15, walks head down through the Delhi streets to her school, 15 minutes from home. When she walks past the local park, the boys stop playing cricket and stare, whistle and make rude comments. She shares the public toilet nearest her home with 250 other people, and knows of girls who have been attacked there. She and her friends are pretty creative when it comes to ways of protecting themselves: chilli powder and safety pins are the current home-made weapons of choice. Rehana also learns martial arts. She says “If there’s one thing girls should learn in life, it’s karate.”

A city is an uneasy environment for girls. Anyone who has grown up in an urban landscape knows what it means to be street-wise. Staying safe as you travel around is like a dangerous game, trying to stay one step ahead of your assailants. Yet cities can also provide crucial opportunities for education and employment for girls. Each month, five million people are added to the cities of the developing world, and it is estimated that by 2030, approximately 1.5 billion girls will live in urban areas. [1]

Plan International’s latest research [2] with over 1,400 girls and boys in five cities in low and middle income countries shows some disturbing results. In most cities, only a small minority of girls felt ‘always safe’ in their city; in Kampala, Uganda, 80% of the girls who 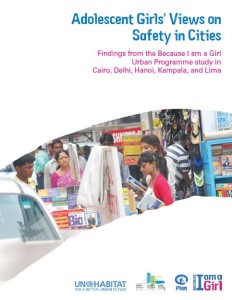 took part reported feeling ‘very unsafe’ or ‘unsafe’ in public spaces and in Delhi, over half of the girls ‘never’ or ‘seldom’ felt safe on public transport, with similar numbers reported for public spaces.

In cities like Delhi, women and girls are also increasingly turning to technology to keep themselves safe. In the wake of the recent highly publicised attacks, there’s been a huge growth in mobile phone apps aimed at helping women to call for help if they are threatened. Apps like FightBack, developed by two female journalists, Shweta Punj and Hindol Sengupta, records your location on a Google map and posts a message to your Facebook wall and well as sending an SMS to your friends and family.

In many countries, mobiles are also seen by parents as a way of keeping a virtual eye on their daughters, keeping in touch wherever they are. Apps like BSafe and MobileKids, created by female entrepreneur Silje Vallestad, both became popular with parents in New York in the wake of a hike in violent incidents last summer. The apps transform their child’s phone into a personal alarm/parental monitoring system.

Yet despite reports that nine out of ten women feel safer by having a mobile phone [3], some bloggers question the efficacy of using mobile apps to address violence against girls and women in cities. Apps don’t deal with the underlying causes of violence against girls in cities, and may even supply would-be attackers with location information and 24/7 access to their victim. And whilst mobile apps are useful for those with a smartphone, the most vulnerable girls may not have access to a phone at all.

Moraba is one app that might just change the game for girls. Developed for feature phone and aimed at teenagers, particularly boys, the app was influenced by extensive interviews with young Southern Africans about violence against girls.

Moraba’s goal is to change boys’ attitudes, in particular those attitudes that could lead to domestic violence as adults.

We guess the reality is that technology is a tool, not a solution, in combating violence against girls in city environments. Developers must take care to manage expectations of what can be achieved with their app. One step towards this would be to research how and why these apps benefit girls, while also identifying – and modifying – areas where girls might become more susceptible to violence through the use of those apps. And the individual nature of mobile phones means that somehow, the design of the response must incorporate ways to build collective awareness within the community (including with religious, law enforcement and government officials) of the challenges that girls face.

Perhaps we’d be better taking our lead from the girls themselves. Plan International’s research, which will be used to advocate for the inclusion of girls within city planning processes, found startling similarities across all five cities with the changes girls wanted to see: public spaces that were well-lit and clean, safe public transport and accessible public services were the top priorities. As Rehana says, “When girls feel safe, they can go outside of their homes. If we don’t move ahead, we’ll be left behind.”

See Rehana and other girls from Delhi project talk about their experiences at http://youtu.be/667O4peOzco