When I tell most people that my first profession was as a teacher, I am often greeted with disbelief. Questions such as “How did you go from teaching to technology?” often follow the initial shock, and increasingly I am beginning to understand why this happens. Before I discuss these reasons, I will first give a brief professional background. 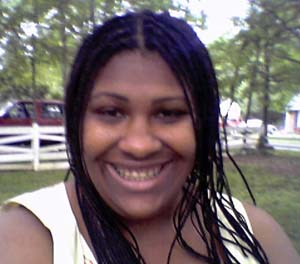 Me in the last month of college study, smiling but terrified of the future!

When I graduated from college (the equivalent of university-level education in the United States), I did not have a firm idea of what type of career I wanted, or even the area that I wanted to work in.

Desperate to get a job and limited in my available options given my majors in Spanish and Philosophy, I took advantage of an opportunity to receive on-the-job training while working as an English as a Second Language (ESL) teacher.

During my first year as a teacher, I was able to work with students from Asia, Africa and Central America. While I derived a lot of joy from this role, the endless testing and the feeling that most of my students were being treated as second-class citizens made me take the decision to leave this job, but not teaching altogether.

Acting on the advice of a friend who was completing a teaching stint in South Korea, I began searching for my first teaching position abroad. 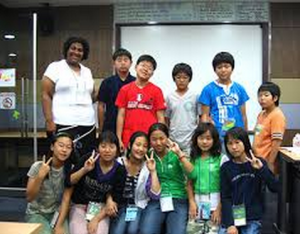 Can you guess which person in the photo is me? 😉

To me, this was a surprising yet exciting prospect for my budding teaching career since I had always wanted to travel more and had a deep appreciation for learning about other cultures. As it turns out, my role in South Korea then led to other positions in Equatorial Guinea, Madagascar, before returning to the United States, and then heading off to Europe. 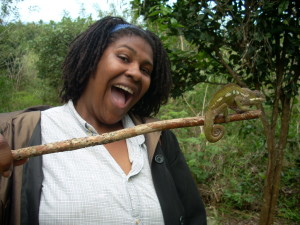 Playing with a chameleon during my teacher training stint in Madagascar.

Chance helped set me on my present path when I took a Master’s level course called Technology in Education. It was on this course that I discovered that the mobile phone could be used as a learning medium.

It is safe to say that after that course, I became engrossed by the potential of mobile telecommunications, especially after my experiences in Equatorial Guinea and Madagascar. In one summer I read any and all things that I could about mobile learning, but then also read about issues and links between gender and technology. This dizzying journey led me to come in contact with one of my professional mentors, Dr. Nancy Hafkin. And the rest is history!

When I met with Nancy, I explained my interests and shared with her some of my emerging work and writings in gender and mobile technology. The encouragement I received from her propelled me on, and she soon introduced me to Sonia Jorge, my second professional mentor. I owe much of my present successes to these two women for giving me the opportunity to enter the world of tech despite not having any background or professional training in the field.

They provided support, a network of like-minded contacts, as well as advice on how to make the most out of a field that historically has not been very balanced from a gender perspective. Now, I have been enjoying a career in mobile telecommunications for nearly five years, and am so glad I made the change! 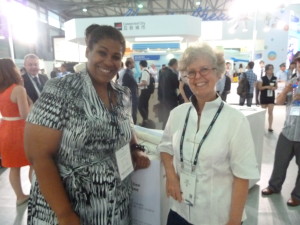 Me with Tyson Greer in Shanghai for Mobile Asia Expo 2013 for my job in mobile telecoms. Photo taken by Sam Adkins.

Here’s some advice I can give to other women who are looking to transition from their present career to one involving tech:

1. Decide on what area of technology you want to work in, then reach out to women who have similar roles. Having mentors were priceless for me, and I think they went a long way to help make my transition successful.

2. Become an expert in the area of technology that you want to work in. While I don’t believe you need to earn a formal qualification to do this, it certainly does not hurt. However, you can also read as much as possible on your own about the subject, and write and share blog posts illustrating your knowledge. People will eventually notice.

3. Help others on your way up in the tech world. The most inspiring part of my journey has been receiving support from pioneers in gender and technology. Now that I am established in tech, I do the same for others – and you should, too, whenever you can! Like Michelle Obama said: “…When you’ve worked hard, and done well, and walked through that doorway of opportunity, you do not slam it shut behind you. You reach back and you give other folks the same chances that helped you succeed.”