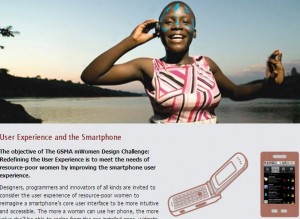 Last month, Wayan Vota of ICT Works shared a thought-provoking blog post that struck a chord with me. He questioned the necessity of the GSMA mWomen Design Challenge given that an effective and simple approach to teaching women literacy with basic handsets had already been devised by the Jokko Initiative.

Wayan extolled the virtues of the the Jokko Initiative, and rightly so: This program for helping women in West Africa build awareness of their right to communicate along with their literacy skills is also my favorite mobile learning project. Tostan has a model that yielded funding-worthy results and I believe would be useful to scale.

Additionally, statistics elsewhere project that increasingly affordable Android handsets will continue to spread in developing markets in Africa and Asia through 2015, and while there is no way to tell how many of these smartphone adoptees will be women, it can be presupposed that some of them will be. Learning how to use these phones is one step on the way to helping women harness the potential benefits of mobiles, including for educational purposes. Why not start looking forward for mobile designs that will benefit women who are smartphone users, since many signs suggest that there is a growing trend in ownership for this group?

In the dissertation for my Master’s program in ICT4D, I wrote the following about gender and social shaping of technology: “Wajcman (1991) contends that not only is technology shaped by users’ social contexts, but that gender is also a component of the social influence that people have on technology. For example, Cockburn and Ormrod (1993) tell how gendering of domestic technologies such as microwaves is an on-going process that does not end at the point of design or manufacturing. When piloting microwave design, engineers in Japan had to respond to women’s use of microwaves to thaw sushi, helping to create the defrost function (Cockburn & Ormrod, 1993). Users play a role in encoding their own gendered meanings on the technology as they appropriate it, and the example provided explains how this encoding can be in response to the users’ needs,” (Zelezny-Green, 2012).

Pitting mangos vs. ice cream sandwiches is an exercise in futility.The real question is who will be behind the winning design of the challenge? I take the position that if mobile technology is to be made easier for women to use, then it should be designed by or with women. Otherwise, the goal of making mobiles for women may not be met –- unarguably the greater missed opportunity as far as mangos and ice cream sandwiches are concerned.