Today was Vodafone’s Connected Woman Summit.
This event featured both day and evening components during which women who had used mobile phones for empowerment in the areas of work, health, access (to many things) and education were able to share their stories. 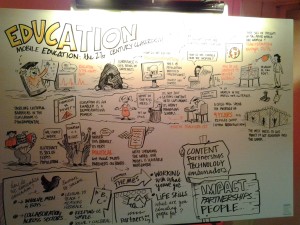 While all the stories were inspiring, of course the crowd favorite was the talk interview that Malala Yousafzai conducted with the Huffington Post UK. During this talk, Malala spoke a lot about why she values education and continues the enormous task of fighting for the rights of other children like here who just want to learn. 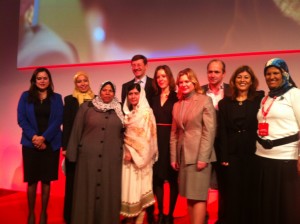 Given that the event was sponsored by Vodafone and featured lots of women + mobile success stories, it was natural for Carla Buzasi, Editor-in-Chief of The Huffington Post UK, to ask for Malala’s thoughts on using mobile phones for education.

The following are paraphrases on what Malala said about mobile learning and the use of technology in education more broadly; they were first typed furiously as well as mentally noted as brief tweets before being included in this blog post. They paraphrases are not meant to be exact quotes. 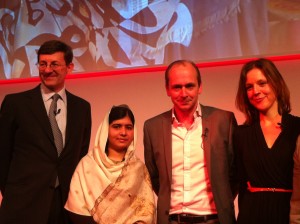 1. Malala said that mobile phones, like any technology are a tool. People can use these tools for both good and bad, and it is up to people to use them for good such as in the case of mobile learning. Mobiles must be used appropriately if they are to benefit people in education, especially women and girls.

Malala says mobiles can be used as tool for learning, we have to use them appropriately and for good. #connectedwomen #mLearning #m4d

Expanding on the theme of using technology to support education, Malala also made mention of the Internet and its place in education.

2. “Of course I think the use of technology in education is helpful! When I am given homework, I have to do research at home online. […] The Internet is very important to the ability of women and girls to access information. […] Having access to the Internet can help make you broadminded.” 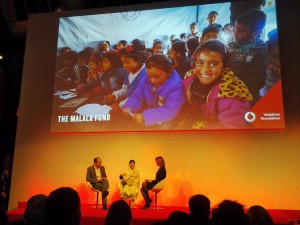 Now this is where the Connected Women Summit shocker comes into play. I have even more respect for Malala after she responds to the question of whether she owns a mobile phone at an event sponsored by a mobile network operator!

3. No. ::followed by an audible gasp from the audience::

Tonight, Malala bravely dusted off the shock some audience members had when she revealed that she did not own a mobile phone. While I did not capture all about why she said she did not own one, I believe it had to do with not needing one at this time/age and being able to do things for her education on computers.

Malala will always be a connected young woman to me. When she’s ready to explore the potential of mobile learning, especially as a tool of empowerment in one or some of her many education projects, I would love to be her guide! Being able to shake her hand and thank her tonight was a highlight of the year for me, to be sure!