For February I am sharing a guest post on the blog written by Sarah Johns, an academic colleague I know from Royal Holloway, University of London. Sarah works for Plan International and is presently completing the MSc in Practising Sustainable Development with ICT4D specialism, the course I completed prior to beginning my PhD work. It was at Royal Holloway that Sarah and I had an engaging conversation about gender and mobile learning, and our conversation inspired Sarah’s post. With her permission, I am reposting the text of the blog here.

At this year’s World Economic Forum in Davos, Plan’s Chief Executive Officer, Nigel Chapman, chaired a discussion on the ‘digital gender divide’. If you’re not sure what the digital gender divide is, imagine a world where your office IT guy is an IT girl, or where the first person to offer you help with your Powerpoint presentation is a woman. How likely is this in your office, your city, your country?

It’s a worldwide problem. For example in the UK, the information, communication and technology (ICT) sector accounts for a whopping 9% of the country’s economy – £81 billion – but just 17% of the people benefiting from employment in this sector are women. Ironically, 17% also happens to be the percentage of women participants at the WEF this year.

Ten years ago the debate was all about the digital divide – a canyon between rich and poor, urban and rural. Recently though, countries like India, Vietnam and Indonesia have seen economic growth partly because their governments have encouraged investment in digital communications and technology, and other countries, such as Kenya, Liberia and Ghana, are watching closely.

There’s no doubt that there has been a growth in jobs and business opportunities in the ICT sector for those able to benefit from the opportunities, but it’s the same old story for girls and women.

Technology is seen as a man’s domain. Shiny new toys and gadgets are aimed at guys. The majority of people working in the technology industry are men. Even the language is gendered: geek, boys’ toys, scientist and engineer. Whether it’s learning ICT skills, or using computers, girls and women face all the usual cultural, social and economic barriers that come with being female. This is the digital gender divide. 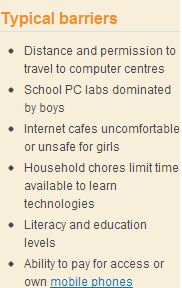 “Girls are burdened with chores which do not provide them with adequate time to learn, access the computer and have time for leisure and play which are all very important for her development” – Abigail, 16 years, Ghana

Chance for change
There are two shining lights on this particular horizon though. The first is the mobile (cell) phone. The ability to have relatively cheap, personal, portable access to digital information and communication is not as revolutionary as some say, but it’s a technological evolution that has great potential to benefit girls and women.

If computers are male, telephones are female, traditionally used for family gossip and chatting with friends or listening to the radio. Women, on the whole, are already in control of this technology, which makes it a hugely powerful tool for change.

In many countries, girls are already using and innovating with mobile phones. In Kenya, the cost of owning a mobile phone dropped by two-thirds in just 3 years (US$10 in 2009 to US$3 in 2011) and this trend is continuing.

Schoolgirls in Nairobi use mobiles to catch up on classes and collaborate on homework. Groups like AkiraChix in Kenya, Women in Technology Uganda and Asikana in Zambia are teaching girls how to create mobile phone applications, particularly using the Android platform where development costs are low.

Women such as Juliana Rotich from Ushadidi and Sheryl Sanderberg from Facebook are also providing crucial role models for girls wanting a science or technology career path. And the future looks good: Asikana has mapped over 20 women’s technology organisations in Africa already, and more are in the pipeline.

What is Plan doing?

The second light on the horizon is us: Plan. We’ve got years of experience of working with girls and women in communities, and we’re increasing our expertise and our voice in this area through initiatives such as Because I am a Girl.

We’ve also got a growing amount of programmes that are integrating technology within more traditional programmes in education, health and disaster response.

I’ll leave the last word with Asri, from Indonesia, who took part in the Because I am a Girl Fast Talk Initiative on ICT and girls in 2011: